This year is the first time that I won’t be going to Salute. I’ve been attending for the last ten years; from when it was at Earls Court to its present incarnation at Excel in Docklands. Salute is an opportunity to see products in the flesh rather than on the web, an opportunity to see new manufacturers showcasing their new products and obviously to buy something that is just perfect to paint. One day.

There is however another Salute, in my adopted homeland of Austria. Smaller obviously, this will be it’s fourth year as opposed to the thirty four years of the English one. When I spoke to Walter Kraus, the organiser, he said the plan was to make it bigger and better each year. This Salute is being run by Silent Night Games, purportedly the biggest gaming club in Austria.
http://www.silent-night-games.at
I set off today for a few blissful child-free hours and arrived at Gasthaus Zur Bahn just after ten and was warmly greeted by Walter. 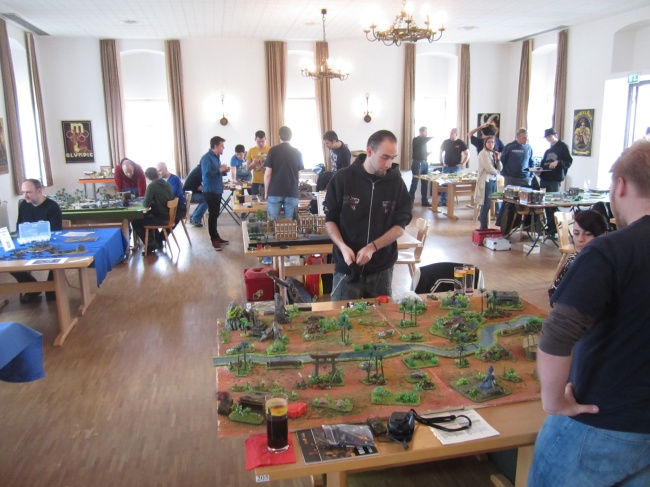 There were thirteen tables covering a range of periods and rulesets, the majority in English.
Field of Glory, 15mm Battle of Bannockburn.
Flames of War, Arab Israeli War.
Maulifax
Freebooters Fate, this was the best looking table in my opinion.
Westwind’s Empire of the Dead.
Beneath the Lilly Banner.
Two Bolt Action tables covering modern Afghanistan and a WW2 USA v Japan.
Warmachine
An unknown air combat.
And a WW1 15mm Austria v Russia using the Piquet ruleset.
Traders were thin on the ground with only one almost stand of some lacklustre expensive laser cut scenery.
I had brought some painted work with me and I spent some time showing them to Georg from Battlebrush Studios.
http://www.battlebrushstudios.com
He revealed his secret for the final highlight on metal armour. Vallejo Metal Medium. I have put that on my wishlist.
What I did learn, if I am brave enough, is to be bolder with my highlights and the shading. Georg’s figures have the “Pop and Wow” factor that I am after. 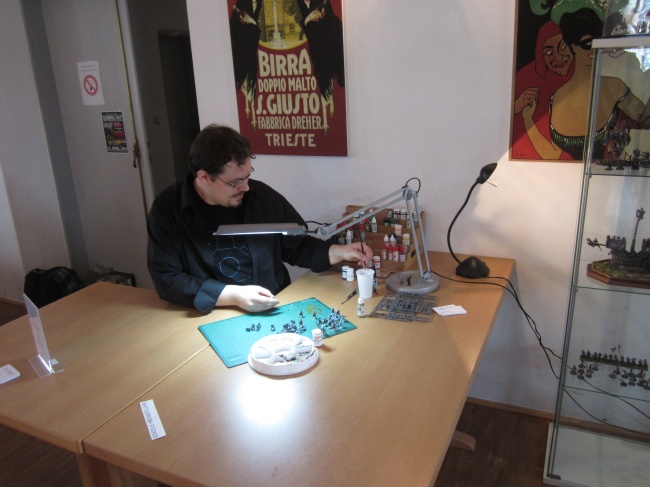 This version of Salute doesn’t compete with the original, yet. Some visiting traders might bring more gamers keen to look and stock up, which may in turn may bring more traders.
Onwards and upwards!
Here’s to the future success of this incarnation of Salute.