Some of my longterm readers may remember a post from early 2015
https://grumpyoldtin.wordpress.com/2015/03/02/januaryfebruary-work/
Well I never heard a word of thanks or received a t-shirt. I was a little disheartened by this.
Anyway, earlier this year somebody posted on the Oldhammer Facebook Community page that a group from Exeter was planning to attend BOYL.
BOYL, Bring Out Your Lead, is sort of THE event to attend for Oldhammerers. Hosted at Wargames Foundry it is a chance for people to meet up and play games with old figures and game systems.
https://www.wargamesfoundry.com/pages/oldhammer
I posted asking if anybody knew Joe Bloggs, the guy who’d asked for the illustration. I got a response asking why and I replied that I was the illustrator and I was still waiting for my t-shirt.
I did get an apology from Joe and the promise that the t-shirt would be sent.
But I did get another message. Would I be intersted in letting my illustation be used for a new miniatures company? There would be some lead and a t-shirt in exchange.
This company had just run a Kickstarter for a very Oldhammer Gnome army which I had fallen for big-time but didn’t have the funds to back.

My response was immediate and in the affirmative.
Just after this Joe sent the t-shirt. It was a less than positive experience. The shirt had been worn and then washed, for which I was grateful. I don’t know why, because most of my clothes these days come from flohmarkts (I’m not very cash rich at the moment),I just didn’t want to touch it. But more dissapointing was the fact that the design had been printed in white on a black t-shirt. Had I have known I would have produced reversed artwork. The t-shirt looked awful.
A couple of weeks ago I got a parcel from OS Miniatures.
In it was;
A t-shirt 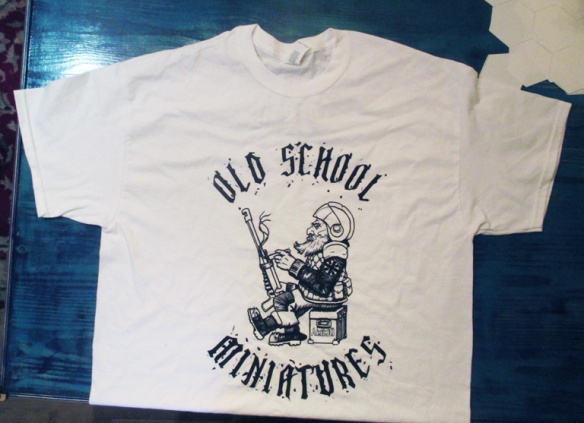 And some minis from a new Kickstarter

And a gnome which I couldn’t resist painting 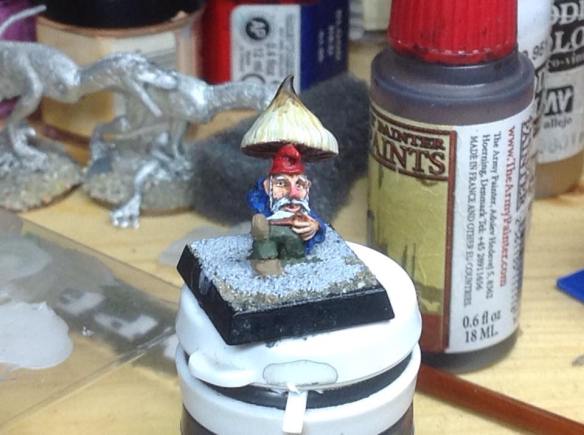 I’ve had further good news.
My illustration is the basis of a miniature sculpted by John Pickford.

AND would I be interested in producing some more illustrations, potentially to be used for future miniatures.
A nice little project for those long winter nights.