The answer to that is, not a lot. My Death Korps Riders hardly got touched and have been retired to the cupboard. This month I’ve pulled out six pyrate figures and I’ll tackle them one at a time.
First up is Captain John Finch from Musketeer Miniatures. 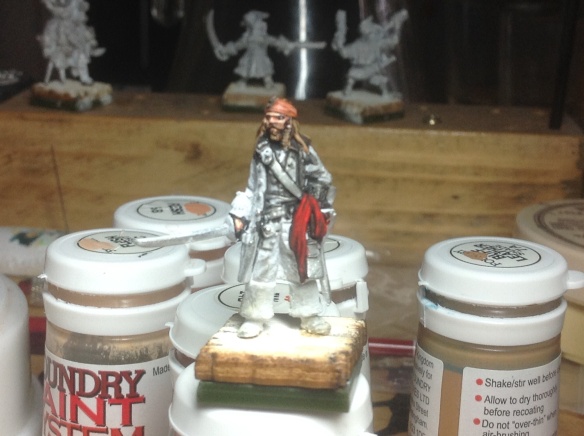 I made the mistake of using some Tamiya Flat White as an undercoat. I might as well have painted them with chalk, the stuff just flaked off. I’ll do a bit of reading about it. It was purchased along with a few other pots of clear colour at a Flohmarkt for fifty cents a pot. The clear colours are fine and I already use the Clear Red for blood and gore.
The month hasn’t been wasted though, I’ve added a few more items to my shop. Go on click the button, I know you’re curious. And I won a painting competition. Puppets War http://puppetswar.eu, a Polish miniatures company are running a monthly painting competition. I entered my Ork Jet which I’d finished earlier this year and I won sixty six Euros to spend in their store. Which was nice.
At the end of the month we get the keys to our new house which is kind of exciting and kind of scary. It does mean that I will be getting a permanent hobby space, although for the first few months it is going to be used mostly as a storage/unpacking area as we clear the lager.